Swept away by the current of the four powerful rivers, tied by the tight bonds of karma, so hard to undo,
Caught in the iron net of self-grasping, Completely enveloped by the total darkness of ignorance,
Endlessly reborn in cyclic existence, Ceaselessly tormented by the three suﬀerings–
Thinking that all mothers are in such a condition, generate the supreme mind of enlightenment.”

Verse 7-8 from The Three Principal Aspects of the Path by Lama TsongKhapa. Translated by Lama Zopa Rinpoche

Who can come?
The retreat is open to women and men, and is structured to cater both beginners and experienced students alike.

What will we study and meditate on?
Lamrim (the stages of the path) is a Tibetan Buddhist text presenting the stages in the complete path to enlightenment taught by the Buddha. It is based on elaborations of Atisha Dipankara’s 11th-century roottext “ A Lamp for the Path to Enlightenment” (Bodhipathapradīpa ). In this course, we will follow the The Lamrim Chenmo, written by Je TsongKhapa, the founder of the Gelug tradition of Tibetan Buddhism.

The topics to be covered during the retreat will include our precious human rebirth, death, the four Noble Truths, refuge in the Three Jewels, the law of cause and effect, the twelve links of dependent origination, the nature of the mind, conventional and ultimate truth, the path to liberation, the development of bodhicitta, and the training in the six perfections – generosity, ethics, patience, joyful effort, concentration and wisdom.

The purpose of the course is twofold: developing a clear understanding of the stages of the path to enlightenment through systematic study and contemplating and meditating on these subjects within the context of the three vehicles, the Four Noble truths, the three higher trainings and the six perfections.

This four week retreat gives the participants an opportunity to immerse in the full range of meditations on the stages of the path within the Mahayana tradition. The end of each week will be dedicated to two days of self practice. Regardless of whether you are a long- time practitioner or absolute beginner, this approach will provide a comprehensive practice to take home.

Who is our teacher? Geshe Ngawang Theckchock was born in Tibet in the year 1970.

He began learning to read and write Tibetan from his parents at a very young age. At the age of 15 he was enrolled into Phelgey Ling monastery and began his training in Buddhist ritual and prayers, culminating in his receiving ordination. He began his formal studies in the five treatises of Buddhist Philosophy at the monastery under the tutelage of well-known masters like Venerable Lobsang Nyima, the 100th Gaden Throne Holder, Venerable Lobsang Tenzin, the 103rd Gaden Throne Holder and Venerable Namgyal Wangchen. In 1992 he received full monk ordination from His Holiness The 14th Dalai Lama at Drepung monastery.

He has been teaching Buddhist Philosophy in Drepung monastery voluntarily for many years. He has also served as a member of the monastery Examination Board.

At present, Geshe la has been the resident teacher at Thosamling for over a year.

How is the course structured?

The retreat is structured in such a way that there will be teachings and Q&A sessions daily with two days at the end of each week for personal study and meditation.

The gradual structure of our retreat makes it ideal both for beginners new to the practice, and for experienced practitioners who would like to dive into a prolonged retreat to re-acquaint themselves with the practices in a quiet and supportive environment under the guidance of an experienced teacher.

What does a typical day involve? 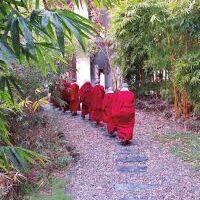 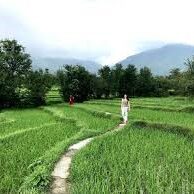 Where do we stay?

A deposit of USD $75/ INR 5000 is required to confirm your place in the retreat (non-refundable).

Thosamling nunnery is located in the Kangra Valley, a 20 minute drive from Dharamsala in the Himachal Pradesh state of North India. The valley has an average elevation of 2000ft. above sea level. Overnight buses leave daily from Delhi and take approximately 10 hours. By air, Thosamling is close to Gaggal Airport, from which we can organise a transfer service for guests.

What should I bring?

We recommend bringing comfortable loose clothing that can be worn in layers. During this time it can be quite warm, but temperaturesmay drop significantly when it rains.

For your own convenience bring an electric kettle with you to make hot water for tea or coffee in your room. You can buy them in Dharamsala.

Please dress respectfully. We are a nunnery, and our staff are Indian men who are not used to women wearing open-shouldered tops, or singlets. If you wear them please cover with a blouse.

An umbrella or rainwear is advisable during the monsoon months.

A torch (flashlight) and extra batteries are useful during power cuts.

It is handy to have your own water bottle. Filtered water is available in our dining hall and out of concern for the environment, we strongly discourage our residents from buying water in plastic bottles.

Earplugs can be useful. Normally it is very quiet in Thosamling but occasionally during wedding season it can be noisy for an evening or two.

Your own bath towel and toiletries.

For any further questions and to register, please contact us at [email protected]