Geshe Ngawang Theckchock was born in Tibet in the year 1970.

He began learning to read and write Tibetan from his parents at a very young age. At the age of 15 he was enrolled into Phelgey Ling monastery and began his training in Buddhist ritual and prayers, culminating in his receiving ordination.

He has been teaching Buddhist Philosophy in Drepeung monastery voluntarily for many years. He has also served as a member of the monastery Examination Board.

At present, Geshe la has been the resident teacher at Thosamling for over a year. 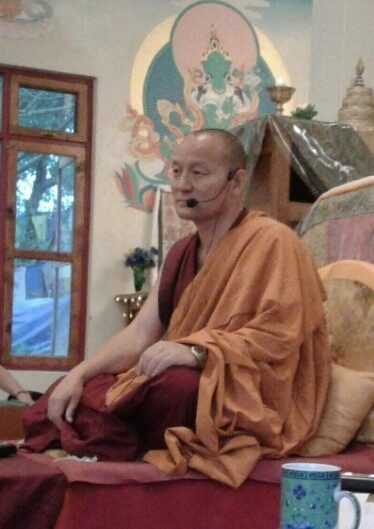 She was born in Tibet in 1982. She came to India in 1993 in order to join Dolmaling Nunnery in Sidhpur, Dharamsala. She studied all the Buddhist topics as part of a study program of Buddhist Philosophy that results into the Geshema degree. Moreover, she attended classes on Tibetan Language and grammar, Tibetan History, modern science, composition, and learnt how to make mandalas. She studied for 3,5 years Sanskrit and Hindi at Sarah College near Dharamsala as well as Varanasi University where she also attended a teacher training course as well.

At Dolmaling Nunnery, she successfully completed the seventeen year course in Buddhist and Tibetan studies as well as the four-year Geshema Degree Program (the latter being conducted from 2015 to 2018. Then having successfully presented her thesis, she was conferred the Geshema Degree (PhD in Buddhist Philosophy) at Khachoe Gakhyil Ling in Nepal on November 5th 2018.

Subsequently, she entered Gyuto Tantric Monastery, Sidhbari, Dharamsala as an external scholar and received tutorials on the major texts as part of a study program of the Tantric teachings. She passed well in both the dialectical debate examination as well as the written examination and on the 15th of February 2020, she obtained the highest grade.