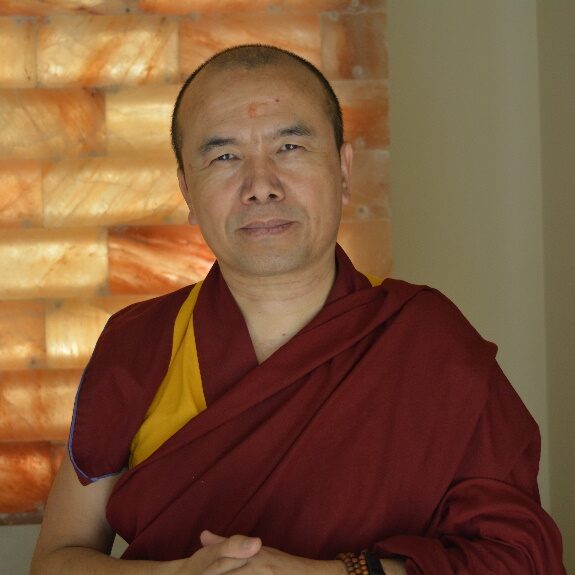 Geshe Dorji Damdul completed his schooling from Upper Tibetan Children’s Village (TCV), Dharamsala, Himachal Pradesh. After seriously contemplating a career as a Physicist during his High School years, in 1988, he instead made the decision to join the Institute of Buddhist Dialectics (IBD), Dharamsala, for formal studies in Buddhist logic, philosophy and epistemology.

From 1994-2001, Geshe Dorji Damdul was affiliated with Drepung Loseling Library, where he served as the editor of Dreloma Magazine.

Prior to that, for five years, he was the editor of, and contributor to, Lhaksam Tsekpa, a journal of comparative studies, published by IBD, the theme of which is modern science and philosophy.

In 2003, the Office of His Holiness the Dalai Lama sent Geshe Dorji Damdul to the University of Cambridge, United Kingdom, for a Proficiency English course. During this time, he was a Visiting Fellow at Girton College, Cambridge University.

During this time, Geshe Dorji Damdul was involved in doing written translations of many texts from Tibetan into English, inter alia, Arya Nagarjuna’s Mulamadyamikakarika (Eng. Fundamental Wisdom of the Middle Way), and Chapter 9, whose subject is wisdom, of Acharya Shantideva’s Bodhicaryavatara (Eng. A Guide to the Bodhisattva’s Way of Life).

Sent by the Office of His Holiness the Dalai Lama, Geshe Dorji Damdul visited the USA in 2008 to work with Professor Paul Ekman (professor emeritus of psychology at the University of California Medical School), one of the pioneers of the science of micro-facial expressions, and the co-author on His Holiness the Dalai Lama’s book, Emotional Awareness: Overcoming the Obstacles to Psychological Balance and Compassion.

His Holiness the Dalai Lama also assigned Geshe Dorji Damdul a text book project, so that he was one of the chief editors for the text book on Buddhist Science and Philosophy. This text book is to be used for Centres and Institutes all over the world to study Buddhist philosophy, metaphysics, epistemology, and science more thoroughly.

Geshe Dorji Damdul also wrote a number of important papers for National and International Conferences held in Delhi University, and so forth. Illustrative topics for these research papers are The Paradox of Brain and Mind, and The Ultimate Reality According to Arya Nagarjuna.

In 2004 – 05, for a period of two years, he was assigned as the Philosophy Lecturer for the Emory University Study Abroad Program, held annually in Dharamsala. In 2008, he was appointed as a Visiting Fellow in Delhi University to give lectures in three of the University’s departments – Philosophy, Psychology, and Buddhist Studies.

In March 2011, Geshe Dorji Damdul was appointed as Director, Tibet House, New Delhi, The Cultural Centre of His Holiness the Dalai Lama.

In this role, Geshe Dorji Damdul’s major activity has been undertaking teaching, by introducing and subsequently, vastly expanding the courses offered, so that today, more than 2,500 students are affiliated to one or other many teaching programmes of the institution.

At first, for some years, drop-in classes were offered in various Buddhist philosophy topics. Finding that this approach had the lacunae of constantly putting fresh beginners alongside regular long-term students, not allowing for the letter to be taught in greater depth, at the request of Mr. Deepesh Thakkar, Geshe Dorji Damdul introduced the Nalanda Master’s Course (NMC), Batch 1.

NMC Batch 1 was auspiciously inaugurated by His Holiness the Dalai Lama himself on 9 December 2016 in Thayagaraj Stadium, New Delhi, and has continued for 5.5 years, until 2 June 2022. NMC Batch 1 had 464 registrations, with representation from 44 countries. Topics covered in-depth include the entire scholastic monastic university syllabus, including Buddhist Psychology; Debate, Logic, Collected Topics; Tenet Systems; Entering the Middle Way; Perfection of Wisdom; Pramanavartika; Abhisamayalamkara; Abhidharmakosh; Overview of Tantra; and Overview of Pratimoksha Vows Tradition. A second iteration of the NMC is due to commence in October 2022.

Alongside, Geshe Dorji Damdul introduced numerous longer-term weekly teachings at Tibet House in the Tibetan language, inter alia, on Tenet Systems; Entering the Middle Way; Pramanavartika; and Bodhicaryavatara. All the above regular longer-term courses also have an online modality, for those who cannot attend in person, that was introduced even prior to Covid.

Each year, except during the pandemic, Geshe Dorji Damdul also travels widely within India and many countries across the globe, to hold bodhicitta retreats or undertake intensive teaching or give lectures on various topics in Buddhist philosophy, psychology, logic and practice.

Geshe Dorji Damdul has also conceptualised and organised multiple annual conferences on various topics at Tibet House, including involving the scientific community. He has provided much supervision and guidance to Ph.D. students in Buddhist Philosophy, enrolled in various universities in India and aboard, and also routinely examines many theses and conducts viva voces.

In 2011, Indira Gandhi National Open University (IGNOU) recruited him as one of the chief experts to design the syllabus for the B.A. and M.A. courses in Tibetan Studies, as a part of the IGNOU academic programme.